How To Stop Arguments Before They Start

Stop Arguments Before They Start

It’s good to argue from time to time, and it’s not realistic to agree on everything. But many of our arguments can be nipped in the bud if we employ some communication techniques. Here’s how to spend more time happy and less time fighting by stopping arguments before they start:

Address issues ASAP. When you are upset or annoyed about something and keep silent about it, it only festers and grows bigger and becomes harder to ignore. When something is bothering you, get into the habit of telling your partner about it right away, rather than letting it build up inside of you. Clear the air as soon as you can so you can move on, instead of silently stewing over it.

Move on from old fights. Holding grudges isn’t fair to you or your partner. If you’ve said that you’ve forgiven them, then you need to be true to your word. It’s not fun for you to stay mad about something that should have cleared up. It’s not useful to either of you to hold on to old issues and keep bringing them up. When you end an argument and makeup, make sure you move on and leave it in the past.

Don’t just say it’s okay. If you’re still upset about something, then say so. Assuming you’re okay and then getting mad later only means that it’s been brewing inside of you and that you’ve misled your partner to think that you’re not upset or angry. If you’re confused, then get it out into the open rather than postponing an argument with passive-aggressive comments.

Give them the benefit of the doubt. Before you jump to get mad at your partner for something they’ve done wrong, give them the benefit of the doubt and assume that they didn’t mean it. This can diffuse so many arguments because we spend lots of time being mad about things that they didn’t intend the way we’ve interpreted them. They probably didn’t mean anything by what they said or did, so instead of getting in a twist about it, try to cut them some slack. 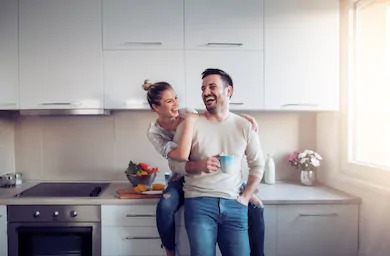 Let the little stuff go. In relationships, we need to pick our battles, or we run the risk of nitpicking or nagging. You can’t get mad at your partner for every little thing that they do that gets on your nerves, or you’ll likely be fighting all the time. Let the small stuff go and bring up the more signific